Handing over of genocide petition in USA and Germany

Handing over of genocide petition in USA and Germany

Handing over in Washington – Note from Jephta Nguherimo 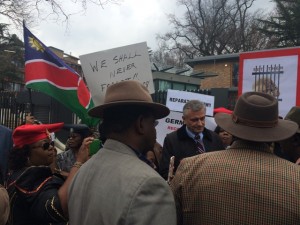 On March 27, 2015 about 20-25 members of the Ovaherero diaspora marched to the German embassy in Washington DC. Prior emails addressing the German ambassador to inform him about the handover of the petition has never acknowledged. Only when writing to Georg Schmidt in Germany, Minister-Counselor Mr. Bohn met the members of the diaspora outside the embassy. Jephta Nguherimo hold a short speech. Then the Paramount Chief Vekuii Rukoro emphasized the importance and impress upon him to inform his government to engage with Ovaherero and Nama. Finally, the Chief handed Mr Bohn the petition. Mr. Bohn promised to relay the message and the petition to the relevant authorities in Berlin. Similar activities happened in Vancouver, British Columbia and the UK.

Speech by Jephta Uaravaera Nguherimo on behalf of the Ovaherero and Nama descendants in the United States | 27.03.2015

Statement by Paramount Chief Adv Vekuii Rukoro on the occassion of handing over the Hereros & Namas’ Genocide Reparation from Germany Petition in Washington | 27.03.2015

NGO alliance „No Amnesty on Genocide!“ handed over the Ovahereros’ online petition to the German Foreign Ministry in Berlin on March 27th 2015

On the 27th of March 2015 representatives of the NGO alliance “No Amnesty on Genocide!” handed over the Hereros & Namas‘ Genocide Reparation from Germany Petition initiated by the Herero Diaspora and descendents to Germany’s Foreign Ministry in Berlin. The demand for reparations concerning the genocide committed 1904-08 by Germany was received by Ambassador Georg Schmidt, Regional Director for Sub-Saharan Africa and the Sahel, who was also willing to meet the petitioners. A photographic documentation of the handing over, however, was not agreed to by the Foreign Office.