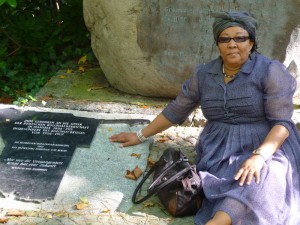 After more than a century, the genocide committed by the German Schutztruppe in today’s Namibia is still an unresolved problem in the relations of the two countries. This came once more to public attention when in September 2011, a large delegation from Namibia came to Berlin to receive 20 skulls that had been deported to Germany during colonial times. The diplomatic debacle at this occasion has contributed to a situation where even the return of further skulls, including 14 identified at the university archives of Freiburg, seems blocked. The central issues remain the official recognition of the genocide by Germany and the demand for a dialogue from the side of Namibian victim groups, which is likely to result in material compensation.

Ida Hoffmann, currently the chairperson of the Nama Genocide Technical Committee, will give a first-hand account from a Namibian perspective. She was a member of the delegation that came to Berlin in 2011. For several decades, she has been involved in the liberation struggle in Namibia as well as in many forms of community work. From 2005 to 2010, she was a member of the National Assembly. Since some time, she has made the dealing with the dire past that is still a daily present in Central and Southern Namibia one of her main concerns.

This talk follows Ida Hoffmann’s participation at the 4 th Panafricanism Congress in Munich, which has made possible her presence in Germany.

Here you can find the audio file of the presentation (30 October 2013 at the University of Freiburg).